LUIGI GANNA – THE KING OF MUD The Cima Coppi Myth, how Fausto Coppi become a legend.

It is May 30, 1953: runners go back to Veneto from Vicenza, where Monti had set the day before.Monti runs that Tour with the Arbos jearsey together, among others, Nino Assirelli and Primo Volpi. In Pink Jearsey there is, quite enough, the Swiss Hugo Koblet who, unknowingly, does not even imagine the storm he is about to fall on him from now on!

May 31, 1953, the third stage, from Auronzo to Bolzano. To scare the riders are not miles, 164, but the steps, three. On Falzarego, Fausto attacks, surprises, shakes, crushes the group. Only the Pink Jearsey Hugo Koblet and Pasqualino Fornara remain attached.

On Pordoi, Fausto recovers half a minute of the two minutes Koblet took down. On the Sella step, Fausto hang Koblet, but a dozen kilometers from the arrival Koblet catches him. Anyway stage at Fausto and the Pink at Hugo.

Coppi said to the radio:

We also admit that he was sincere. The next day, as he saw the ice of the Stelvio shining, the king of the mountain seems to forget those that seemed to be an abdication…

Mr. Milano, a team mate of Fausto, before the start, asked the Pink Jearsey to take a picture, their two, together, in memory. He also asked to remove his sunglasses from sun. Was an excuse: “I wanted to look him in the eyes.” Koblet comes to the streets with heavy eyes, Mr. Milano will report to his captain. Coppi understands the opponent is in trouble. 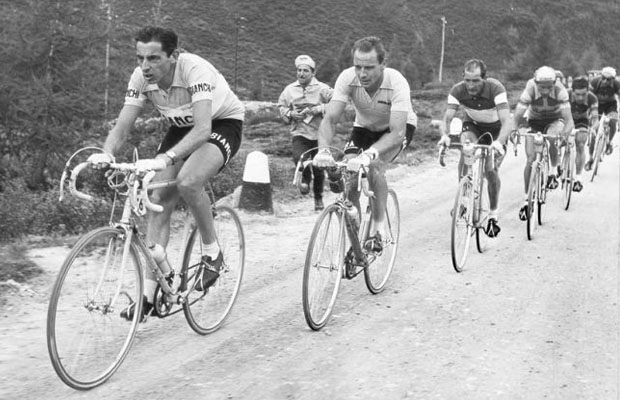 At the start of the race the atmosphere is peaceful, but war is in the air. At the Stelvio Pass begins the dirty road, 48 curves to climbing.

The climbing king is Fausto. Arrived at the top the detachment rises to 1 ‘and 20’ ‘, but the mountain is made of ups and downs…

During the downhill the Swiss Man seemed lightning, thus canceling the detachment, the two rivals will come along togheter in Bolzano.

One by one he shrugged off all his opponents, last to resist Fornara. At 10 km from the top, Coppi is lonely.

Above the 2700m, the snow does not measure more by cm but by meters, but He, giant slimy cuts the air with its sharp profile.

Arriving in Bormio among crazy admirers, Koblet will arrive with more than 3 minutes of detachment, the Pink Jearsey is no longer swiss. Coppi is in Pink!

If you want to know more about Fausto Coppi, LET’S GO HERE Fausto Coppi fans writing his name on the snow